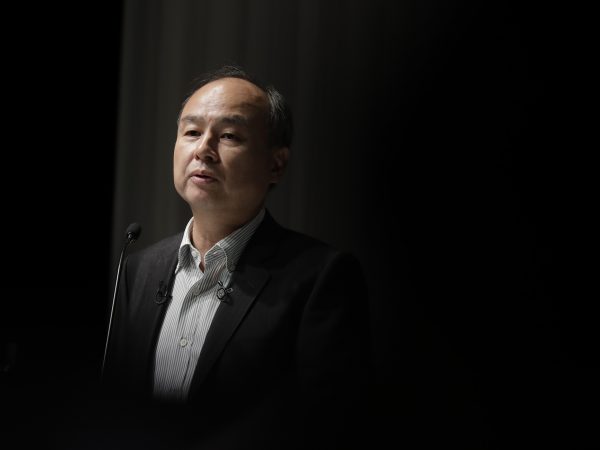 Softbank’s founder used to reign as the king of venture capitalists. Now he is being eclipsed by the likes of the former Facebook exec.

The worst seems to be behind SoftBank Group Corp. Its stock price has surpassed its dot-com peak, thanks in part to aggressive share buybacks and the successful initial public offerings of its unicorns, such as food delivery startup DoorDash Inc.

But founder Masayoshi Son’s star power is waning. SoftBank managed to raise only $600 million last year in the U.S. SPAC boom. Its third blank check outing has a goal of only $280 million. In comparison, Chamath Palihapitiya, a former Facebook Inc. executive, venture capitalist, and social influencer, raised $2.1 billion in one October day alone. He’s the new superstar on the block.

Son’s eclipse is probably due to SoftBank’s troubled past — which isn’t that much in the past. Still vivid are WeWork’s IPO debacle in 2019, and the messy entanglement with WireCard AG last year. SoftBank is now considering a complete write-down of its $1.5 billion stake in Greensill Capital, which was using reverse factoring to disrupt the sleepy supply-chain finance sector.

Can Masa restart 2021 with a clean slate, pushing aside upstarts like Chamath and re-emerging as the world’s premier venture capitalist?

Let’s take a look at what Softbank’s founder and chief executive is up to. His Vision Fund is preparing one of the unicorns it’s long nurtured in its stables for an IPO: the South Korean e-commerce giant Coupang, whose operations span online groceries and restaurant deliveries all the way to video streaming. Coupang is seeking to raise up to $3.6 billion in New York. That has a whiff of Son’s old recipe for success, which was embodied in WeWork. When the shared workspace company came to market in 2019, investors worried about its massive debt pile, including $47 billion in lease obligations. It was an extreme example of what Masa loved — debt-fueled mega-unicorns that seemed to grow despite the odds.

Like WeWork, Coupang — which was founded a decade ago — seems forever hungry for cash. In 2020, its revenue jumped 91% year-on-year to $12 billion, but its operating costs rose 81% as well. Meanwhile, its working capital flipped into a deficit of $892 million from $273 million in surplus a year earlier.

Because of its cash burn, Coupang had negative equity as of 2020 year-end, despite $2 billion in investments from the $100 billion Vision Fund, agreed upon in December 2018. The South Korean company sat on $5.7 billion in debt; roughly half of which, or $2.9 billion, was in the form of accounts payable to its suppliers. It’s no surprise then, that Coupang is keen to go public.

The question remains for investors: Where’s the operating leverage of this 10-year-old, or its economies of scale? Profitability appears out of reach.

Granted, as long as Coupang can list, it’s a win for Masa. Over the years, SoftBank has put $3 billion into the Korean company and, after the IPO, will hold a 37% stake via the Vision Fund. At the mid-point of the offering range, that would be worth $18 billion. The Vision Fund is not selling when Coupang debuts in New York, but it can record a sweet paper gain.

All well and good. But Coupang reminds us how many aging unicorns SoftBank still has hanging around in its Vision Fund. What makes Coupang stand out exactly, other than cash burn?

On the other hand, Palihapitiya seems to be involved with cutting edge enterprises. He merged his first SPAC with Richard Branson’s space tourism business Virgin Galactic Holdings Inc. His second SPAC was with real estate tech start-up Opendoor Technologies Inc, which was first backed by Masa in 2018. It was Palihapitiya, however, who got it listed.

Take a look at Vision Fund’s portfolio. Since its inception in 2017, only 11 start-ups in its portfolio have gone public; 74, including Indonesian e-commerce company Tokopedia PT, which has only reached a series I funding round, are still privately-held. As of December 2020, the Vision Fund notched $18 billion in capital gain from a year ago. But can these wins be turned into cash profits? The fund expects $10.1 billion in gross realized proceeds from its sales of ARM Holdings Inc. to Nvidia Corp. That deal has not closed yet.

SoftBank’s attempt to ride the SPAC boom comes across as flawed. In its revised prospectus for the third blank check company, SoftBank removed the warrant that allows its holders to buy more shares at a 15% premium to the $10 issue price.

That may explain why SoftBank is cutting its offering goal. SPACs are well-liked by hedge funds and retail investors, with the former seeing it as a fixed income product with a ton of upside — thanks to the warrant — while the latter uses it as a “poor man’s” private equity fund. As the offering currently stands, Masa is not giving hedge funds the upside they crave and is keeping it all to himself. Chamath, on the other hand, is fully into playing the game: promoting via tweet his involvement in a so-called private investing in public equity (PIPE) funding round to help his SPACs merge with targets.

Sure, SoftBank’s stock price has returned to its dot-com peak. But is that really something worth celebrating? So did the Nasdaq — and the benchmark index has rallied well beyond its old heights. The world has moved on. Masa is beginning to sound like a name from the past. Once upon a time, he ran the world’s biggest venture capital fund.