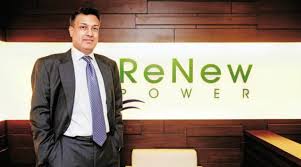 Independent power producer ReNew Power has agreed to go public through a merger with RMG Acquisition Corporation II, a US special purpose acquisition company (SPAC), in a deal that values the combined entity at US$8 billion.

India-based ReNew said the transaction will bolster its position in solar and wind generation in its home market by funding medium-term growth opportunities, as well as paying down debt.

The deal, expected to close in the second quarter of this year, will be financed with proceeds of US$1.2 billion, including US$855 million in investments from funds managed by BlackRock, BNP Paribas as well as Chamath Palihapitiya, a former Facebook executive who last month announced an investment in solar financing group Sunlight Financial in another SPAC deal.

Backed by Goldman Sachs, the Canada Pension Plan Investment Board and Abu Dhabi Investment Authority, among others, ReNew Power claims to be the only company in India’s renewable energy sector with more than 5GW of operational capacity. Including capacity won in competitive bids, the firm currently has an aggregate capacity of close to 10GW.

Alongside a portfolio of more than 100 operational utility-scale PV and wind plants in India, ReNew owns and operates distributed solar energy projects for over 150 commercial and industrial customers.

Founder, CEO and chairman Sumant Sinha said the company aims to expand its capabilities in areas such as utility-scale battery storage. “Over the next decade, ReNew plans to maintain its track record of market share growth, and contribution to the greening of the Indian power sector, and to help meet the Indian government’s ambitious renewable energy targets.”

The country is targeting 450GW of installed renewables capacity by 2030, a five-fold increase on current levels that will require an investment of around US$500 billion, according to new research from the Institute of Energy Economics and Financial Analysis.

For RMG Acquisition Corporation II, a SPAC that was formed for the purpose of effecting a merger or similar business combination, the announcement comes after it raised US$345 million in a December 2020 initial public offering.

RMG II CEO Bob Mancini said ReNew Power “is the best-positioned renewable energy firm in India”, adding: “Its commitment to measured growth through long-term partnerships with Indian central and state government agencies, scale, technological innovation, and strong financial position should enable ReNew to take advantage of the incredibly positive trends in the Indian power market over the next decade and beyond.”

Upon closing of the transaction, the combined company would be named ReNew Energy Global and is expected to be listed on the Nasdaq under the ticker symbol ‘RNW’. Sumant Sinha will remain chairman and CEO.