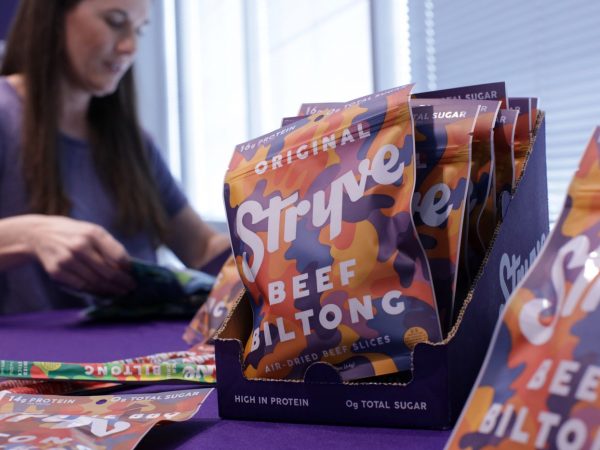 The maker of a healthy, beef jerky-like cured meat snack popularized in South Africa has its product in more than 17,000 stores across the U.S.

The emerging snack food company Stryve plans to go public through a direct listing on the NASDAQ later this year in a deal valuing the Plano company at $170 million.

Stryve is merging with the publicly traded Andina Acquisition Corp. III, a special-purpose acquisition company, or SPAC — an entity set up to seek companies to buy. It’s the third Andina SPAC. Predecessor funds took an architectural glass manufacturer and RV dealership public over the last decade.

The transaction, which will provide $67 million in cash proceeds to Stryve, is expected to close in the second quarter of 2021. The company will become Stryve Foods Inc. and will trade under the ticker symbol SNAX.

Stryve is the latest in a surge of companies opting to attract investors through SPACs. Already this year, 131 companies have gone public through the so-called blank check companies.

Private-equity firms weren’t as interested in Stryve because the company had already invested heavily in its own cured meats manufacturing plant, allowing it, unlike competitors, to vertically integrate production. Alt said that was strategic in order to secure Stryve’s market share.

In 2019, Stryve completed an $11 million, 55,000-square-foot, 100-employee biltong plant that it owns and operates in Madill, Okla. Biltong is a jerky-like air-dried beef originating in South Africa that boasts less sugar and additives than traditional beef jerky.

Its biltong snacks are on shelves in 17,000 stores across the U.S., including Walmart, Kroger, Sprouts, 7-Eleven and 25 other retailers. Biltong is also available from Amazon.

Several companies have emerged with biltong products in recent years to capitalize on the meat snack category, which is estimated to become a $5 billion market in 2022. Stryve acquired leading competitor Kalahari Snacks for an undisclosed amount in February, making it the leader in air-dried meat companies in the U.S.

Stryve also recently appointed 7-Eleven veteran Scott McCombs as chief financial officer as it gears up to emerge from the SPAC merger as an emerging snack foods company rather than one focused on meat snacks alone.

“Our goal is to continue to do what we’re doing with meat snacks, and we’re going to more than double our business this year, but to also start extending into other platforms,” Alt said.

Before the deal with Andina, Stryve raised $16.5 million in 2019 in a Series B funding round.

Investors in the company, including Hollywood actor Channing Tatum and Los Angeles Chargers quarterback Justin Herbert, contributed $42.5 million to the SPAC transaction at $10 a share, according to Forbes.

“I’m thrilled to be an investor and to support their mission to help America snack better,” Tatum said in a statement, “and on a personal note I love their products, which I enjoy when I’m training, camping, or just hanging at home.”