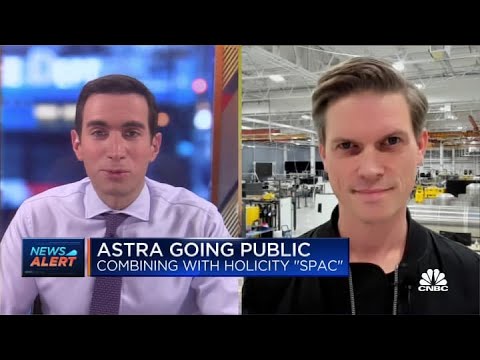 San Francisco-area startup Astra is going to be the next publicly-traded space stock, as well as the first that’s dedicated to orbital rocket launches. Chris Kemp, Astra founder, chairman and CEO, joined “Squawk Box” on Tuesday to discuss.

San Francisco-area start-up Astra is going to be the next publicly traded space stock, as well as the first that’s dedicated to orbital rocket launches.

Astra announced on CNBC’s “Squawk Box” on Monday that it is merging with special purpose acquisition company Holicity to go public in a deal that values the rocket company at a $2.1 billion enterprise value. Astra will list on the Nasdaq under the ticker symbol ASTR when the deal closes, which is expected in the second quarter.

“We’re seeing hundreds of companies that want to get from anywhere on Earth to anywhere in space on their schedule — not wait years to get a lot of things to one place,” Astra CEO Chris Kemp said. “So we’re really focused on building a much smaller rocket, produced in much higher volume, launched from a much larger number of locations.”

Holicity’s SPAC currently trades under the ticker HOL. The deal is expected to provide Astra with up to $500 million in cash proceeds, including $200 million in a PIPE round led by BlackRock.

Shares of the Holicity SPAC jumped more than 75% in premarket trading Tuesday from its previous close of $10.33.

The rocket start-up in December became the latest private company to reach space after its Rocket 3.2 vehicle launched from Kodiak, Alaska. Although the rocket came just shy of orbit, Kemp told reporters that the mission “far exceeded our team’s expectations.”

Astra was incorporated in October 2016. It has raised about $100 million before the SPAC deal, from investors including Advance (the investment arm of the family of the late billionaire S.I. Newhouse), ACME Capital, Airbus Ventures, Canaan Partners and Salesforce founder Marc Benioff.

“What’s exciting about this transaction is the speed with which we’re able to bring the company; we just achieved our first orbital capability,” Kemp said. “This was the fastest way for us to not only raise over half a billion dollars of capital but also reach public markets.”

The company’s rocket stands about 40 feet tall, putting it in the category of small launch vehicles. These small rockets have become more popular due to an increase in the number of small satellites and spacecraft, often the size of a mailbox or washing machine, looking for rides to orbit. Astra’s rocket is advertised as capable of carrying up to 100 kilograms to low Earth orbit, for as little as $2.5 million for a dedicated launch.

Astra says it has over 50 launches on its manifest, spanning 10 corporate and government customers including NASA and the Pentagon, with $150 million of booked launch revenue under contract.

The company expects to begin commercial service of its rocket business this summer, with monthly launches expected to begin by year-end. Astra aims to be launching rockets daily by 2025.