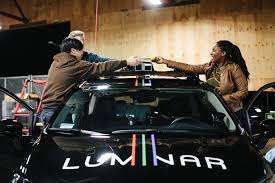 Shares’ prices of Luminar Technologies Inc., the Beverly Hills, California-headquartered Lidar-sensor manufacturer for autonomous driving technology, witnessed an exploding rally at its Nasdaq-debut on Thursday, while the eight-year old Silicon Valley start-up mushroomed as much as 30 percent in pre-market trading.

Nonetheless, after paring some of its earlier gains in late-afternoon US trading, Nasdaq-listed shares of Luminar Technologies Inc. had rounded off the day 27.67 higher to $22.98. In point of fact, Thursday’s public market debut of Luminar, which has yet to deliver a key sensor for autonomous cars, but had reached an accord with Swiss automotive giant Volvo earlier this year, followed a merger with an SPAC (Special Purpose Acquisition Company) or blank check company Gores Metropoulos Inc., while Luminar had raised a stark upsum of $590 million from the merger which in effect had helped the California-based lidar senor maker bypass the conventional IPO route to make entrance into the public trading.

Notably, SPACs or blank check companies are shell corporations which could be capitalized on taking a company public following a merger or a potential acquisition.

More importantly, following its Nasdaq debut on Thursday, Luminar became one of the third lidar sensor makers that had chosen an SPAC route to public market trading, while Aeva Inc. had told in a statement last month that it had been brewing off an option to enter public market trading through a merger with SPAC firm InterPrivate Acquisition Corp. Besides, Velodyne Lidar Inc., a San Jose-based lidar sensor maker engaged in 25 self-driving projects, took the SPAC route to public markets back in September this year.

Meanwhile, following its Nasdaq-debut, Luminar said in a statement that the company which has nine advanced deals with big-league automakers, was looking to billions of dollars in revenues per year, though Luminar’s revenue growth would largely depend on whether the lidar sensor maker could turn its research relationship into long-term production deals, suggested analysts.

Last year, Luminar had reported a revenue of $15 million and a net loss of $94.7 million, however, the company was expecting to trim its net losses to $72 million by end-2020, Luminar Chief Executive Austin Russel said in an interview earlier in the day.