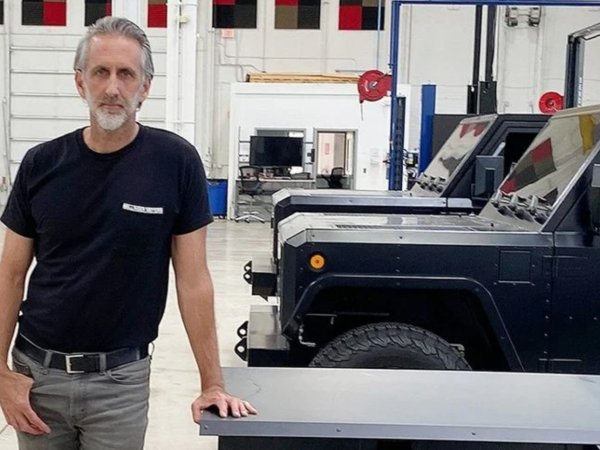 Robert Bollinger is in the middle of raising a mere $50 million to get his self-named, Oak Park-based startup’s Hummer-like electric trucks into production.

It’s not looking like a hard sell — a handful of special purpose acquisition companies, or SPACs, recently knocked on his door to buy a chunk of the company.

Still, Bollinger is facing a big decision: Take the big money and risk the scrutiny that newly public electric-vehicle companies are getting from short sellers, or slow things down and go it alone.

SPACs are publicly traded shells that raise cash from investors. They in turn trust startup founders to do the due diligence and access the public markets via reverse mergers. There have been at least a half-dozen such deals over the past 12 months, funneling hundreds of millions of dollars into electric or hydrogen-powered vehicle startups, including Nikola Corp. and Workhorse Group Inc. Almost all the startups have little or no revenue to speak of.

Bollinger said he’s so far spurned advances from SPACs he declined to name. He’d rather wait until he has agreements with existing manufacturers in place to build his planned commercial trucks and delivery vans. That will raise the value of his company before selling a stake.

Becoming a public company brings scrutiny and pressure from investors. In the past two months, short sellers have targeted clean-truck startups Nikola and Workhorse. A Sept. 10 report on Nikola called the company a fraud and sent the shares tumbling 25 percent in two days. The SPAC VectoIQ acquired Nikola in June on the promise of its hydrogen-fuel-cell freight trucks. Founder Trevor Milton departed the chairman’s seat on Sept. 21, following accusations in the report that Nikola had no working technology.

“A SPAC is wonderful because they drop a ton of money in your lap,” Bollinger said. “The downside is that being public is a lot more work. If we sell to a SPAC, it will be after the dust settles on Nikola.”

Bollinger Motors plans to work with third-party manufacturers to build its B1 SUV and B2 pickup truck, starting in late 2021. The 44-person company says it has 1,000 customers who have ponied up $1,000 each to reserve one of the vehicles. Bollinger is working on similar arrangements to build commercial delivery vans and other commercial trucks.

The B1 and B2 concepts are working vehicles. They have a military look, with squared-off edges that reference the original Humvee. Bollinger said he needs $50 million to finish engineering work and a total of $250 million to get the B1, B2, and his commercial vehicles into production.

All of the company’s vehicles use someone else’s battery cells. Bollinger has designed the battery packs and battery-management system, along with the chassis for each model and the styling. The company uses 35 kilowatt-hour battery packs that can be connected to each other, Lego-like, in the chassis to give the trucks more power on board.

Bollinger studied industrial design at Carnegie Mellon and said he tried to get into automotive design but couldn’t find a job. He wound up in marketing and advertising, working for the Deutsch agency. He later got a job in the early days of John Masters Organics as chief marketing officer for the company’s hair-care products. When it sold to a distributor in 2016, he cashed out and started a grass-fed beef farm in upstate New York.

That’s when Bollinger got the bug to make his own electric truck. He didn’t like the way his Chevrolet pickup drove. With four-wheel-drive engaged, it didn’t steer well. He said it also had only about 10 inches of ground clearance, making off-road driving on his farm precarious. As long as he was rethinking trucks, they might as well be green.

“The car companies have all been making trucks the same way for 100 years,” he said. “My idea was to look at this and ask, ‘How do we make this better?’”

The B2 has some other tricks, like storage space that starts in the trunk in the front end and tunnels all the way to the pickup bed. That enables the vehicle to carry 16-foot boards without anything hanging off the end. On its website, Bollinger Motors said the truck will have the equivalent of 614 horsepower and go at least 200 miles on a charge while towing 7,500 pounds. General Motors Co. has said its Hummer EV will go more than 300 miles on a charge.

Bollinger says the real business will be in commercial trucks. That’s why he developed the Chass-E, an electric chassis that could be used to build electric Class 3 freight trucks. Class 3 trucks are large delivery vans and can haul as much as 14,000 pounds.

The Chass-E looks like a rugged, black steel skateboard that commercial buyers could use for a wide range of vehicles, Bollinger said. Mining companies are interested in it because it has high ground clearance. The company also is developing an electric delivery van, the Deliver-E, to target customers like Amazon.com Inc., FedEx Corp. and United Parcel Service Inc.

“The B1 and B2 will be niche products,” said Sam Abuelsamid, principal research analyst with Guidehouse Insights, a research company. “If they can get customers for the chassis, they can build a business around that. There’s a lot of interest in going electric for delivery vans, box vans and armored cars.”

There is competition. Plymouth-based Rivian Automotive Inc., backed by Amazon and Ford Motor Co., incorporates a similar skateboard chassis that has several potential applications. If Bollinger Motors gets its vehicles to market, it will be up against a well-funded startup as well as Ford and GM, which have plans for electric commercial vehicles, Abuelsamid said. And there are the other startups chasing the same market.

With the race on to develop an electric truck, Bollinger may have to move fast. The SPACs, he said, are “not off the table, but we have to be cautious about how we raise money. I won’t say no to it if it raises all of the money we need.”