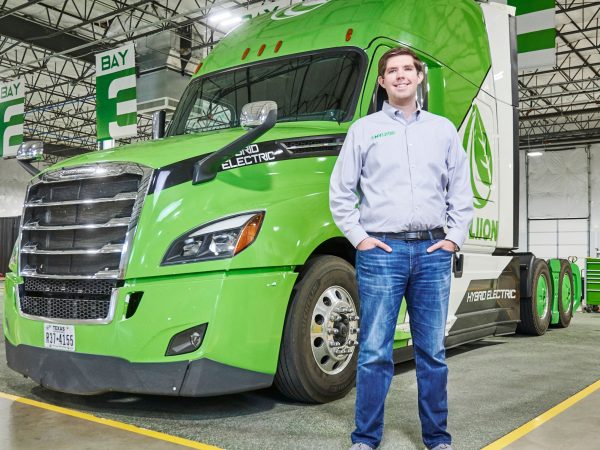 A lot of promising companies have burst onto Wall Street’s scene over the past few months via reverse mergers with special purpose acquisitions companies (SPACs), but few have made as flashy of a debut as electric trucking company Hyliion (NASDAQ:HYLN) stock, which went public through blank-check company Tortoise Acquisition Corp.

When this merger was proposed, Hyliion stock — formerly SHLL stock — was trading around $10, implying a full-diluted market capitalization for Hyliion of $1.6 billion.

A few months later, the stock soared to $60, giving Hyliion a market capitalization of nearly $10 billion. To be sure, Hyliion stock has since dropped back toward$30, for a valuation on Hyliion of just under $5 billion.

Still, that’s a huge run-up. Why all the hype? And does HYLN deserve it?

In short, all the hype is a result of Hyliion’s novel and breakthrough alternative drive system which could pioneer enormous disruption across the $800 billion global trucking market, and yes, Hyliion deserves the hype because if the company executes on its growth roadmap over the next few years, this is a $30+ billion company in the making.

So, despite its huge run-up, HYLN stock is a still a long-term buy.

HYLN Stock: Traditional Renewables Not Up to Par in Trucking

What do you think of when I say “renewable energy”?

Probably wind. Maybe solar. Maybe hydrogen. Those are, after all, the three largest renewable energy sources on the planet.

But, those aren’t the three only renewable energy sources out there, and while they are critical to unlocking a greener and cleaner future for our planet and society, they are not panaceas.

That is, in certain end markets, wind, solar and hydrogen simply don’t cut in terms of performance or cost to be a viable energy alternative.

One such end-market is heavy-duty commercial vehicles (or HCVs, for short). These trucks need to be decarbonized, since they are huge contributors to greenhouse gas emissions. But, they also need to travel long distances and carry huge fuel costs. Incumbent battery-electric and hydrogen energy solutions are simply not up to par at the current moment to tackle those challenges.

Battery-electric trucks can only travel a few hundred miles on one charge, and there are less than 10 Class 6-8 electric truck recharging stations across North America. Simultaneously, while hydrogen trucks can travel farther, they are still hampered by infrastructure (there are also less than 10 Class 6-8 hydrogen truck refueling stations across North America).

Meanwhile, both hydrogen and battery-electric trucks are cost-constrained. Fuel costs for a diesel truck run around $3 per gallon. At current prices, hydrogen costs about $12 per diesel gallon equivalent, while electricity costs around $7.

Thus, while the trucking industry needs to go green, traditional renewable energy sources are not ready to viably decarbonize the industry just yet.

Fortunately, there’s another, entirely overlooked and ostensibly counterintuitive renewable energy source which is ready to immediately and cost-effectively decarbonize the trucking industry.

Is Renewable Natural Gas the Next Big Thing?

RNG is natural gas, just sourced from animal, industrial and food waste as opposed to fossil fuels. Sure, that means RNG still emits CO2 during the natural gas combustion process (not good for the environment). But it also means that RNG captures and uses methane in traditionally methane-rich waste, and therefore, prevents that methane for being emitted (really good for the environment).

Methane is considered much, much worse in terms of global climate change than CO2, mostly because the former is much, much better at absorbing heat. Therefore, as a process which boosts CO2 emissions yet simultaneously reduces methane emissions, RNG is considered net carbon-negative and ultimately a big “win” for the environment.

Of course, the big upside of RNG is economically-rooted: Unlike wind, hydro and solar, RNG can is a plug-and-play solution with existing natural gas infrastructure, and therefore, doesn’t require huge capital spending to work at scale.

To that end, RNG is the only clean-energy source in the trucking market that is both immediately usable and exceptionally cost-effective.

The refueling infrastructure is already in place. There are 729 Class 6-8 natural gas refueling stations across North America. RNG can be pumped through all of those stations.

Plus, the fuel costs are exceptionally low. Current RNG prices hover around $1 per diesel gallon equivalent, while hydrogen and electricity prices — though steadily falling — still sit staunchly north of $5.

Thus, it’s clear to see that RNG will be the face of the clean energy revolution in trucking for the next several years. Indeed, Deloitte projects that, by 2026, about 80% of all alternative drive systems in heavy duty trucks will be based on natural gas.

Hyliion is positioned with a best-in-breed RNG truck powertrain platform – dubbed the Hypertruck ERX – that is due to start deliveries in 2021/2022.

This platform will materially disrupt the trucking industry, and over the next decade, you could see a lot of UPS (NYSE:UPS), DHL, FedEx (NYSE:FDX), Coca-Cola (NYSE:KO) and Walmart (NYSE:WMT) trucks be built on the Hypertruck ERX powertrain.

Just look at the numbers here. Hyliion consistently outperforms its closest and biggest rivals, Nikola (NASDAQ:NKLA) and Tesla (NASDAQ:TSLA). The Hypertruck ERX has:

In other words, Hyliion’s Hypertruck ERX is the best clean-energy long-haul truck technology platform in the market … meaning it is ready to lead the clean-energy disruption of the Class 8 trucking market.

Globally, about 1.7 million heavy-duty commercial vehicles (HCVs) are sold every year. Let’s say this market follows the passenger car electrification arc, and that by 2030, more than 30% of new HCVs sold are built on alternative drive systems.

The company’s internal financials imply average annual revenue per powertrain of over $60,000, while EBITDA margins at scale should rise toward 35%.

Under those assumptions, Hyliion should clear $2 billion in EBITDA in 2030.

High quality truck components suppliers can fetch a 15X EBITDA multiple. That implies a potential future enterprise value for Hyliion of $30-plus billion, versus a market cap of ~$5 billion today.

HYLN has been on a huge run-up over the past several months, and this surge is now starting to moderate.

I think the recent cooldown in Hyliion is little more than a buying opportunity.

Over the next few years, RNG uptake in the HCV industry will significantly increase, and Hyliion is positioned with a best-in-breed RNG solution. To that end, I see Hyliion selling a lot of powertrains into the huge global trucking market in the 2020s — a dynamic that should keep HYLN stock on a solid long-term uptrend.

Source: InvestorPlace – Despite Its Huge Run-Up, Hyliion Stock is Still a Long-Term Buy