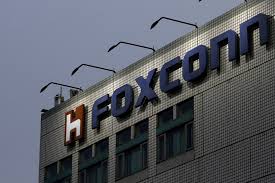 A spinoff and overseas listing of its new division can help build credibility as a reliable partner.

More than three years after Foxconn Technology Group signed a boondoggle deal with Wisconsin to bring cutting-edge technology to the  Midwestern state, the project has finally been trimmed back to a scale that’s actually realistic and palatable to all parties.

Now, the Taiwanese manufacturer is likely to try rebuilding credibility in the U.S. through an industry that makes far more sense to the economy — electric vehicles — and hang out its shingle by listing shares via a special purpose acquisition company, or SPAC. This offers a chance to raise money, bring in more partners, and rewrite a narrative it needs to outgrow its reputation of being a low-cost maker of electronics such as Apple Inc. iPhones.

This rebranding is needed. Foxconn’s cycle of pledge, back out, and renegotiate unfolded in Wisconsin exactly as I’d predicted before Donald Trump took the White House and later participated in the ground-breaking. It was obvious that $10 billion would never be spent and thousands of jobs weren’t going to be created.

Under a new deal, Governor Tony Evers, who was elected in 2019 due in part to anti-Foxconn sentiment, announced last week that state incentives would be slashed to $80 million from $3 billion. Specific products or industries are no longer required. Instead, the company now has almost free rein to make whatever it wants and isn’t tied to an out-of-place 10.5 generation display factory as long as it hits the required employment and investment targets. The state’s incentives would come in at more than  $13,000 per job, markedly smaller than the earlier $170,000 apiece. 1

With this fresh pragmatism from both sides, Foxconn can move beyond its recent U.S. drama while jumping on the hippest new trends in the American economy today: electric vehicles and SPACs, also known as blank-check share listings.

The company unveiled plans last year to get into the electric-vehicle business as both a developer of the underlying car platform, and as a contract manufacturer of automobiles. Among its first clients is California-based startup Fisker Inc., which delivered its first EVs a decade ago. Chairman Young Liu has made it clear he expects to sign up more international customers in coming years.

And yet, despite getting more than 70% of its revenue from clients in the Americas, half from Apple alone, Foxconn is relatively unknown there. Western investors have little chance to buy into the stock. Over the past 20 years, its flagship Hon Hai Precision Industry Co. has spun off half-a-dozen affiliates and listed them in Taipei, Hong Kong and Shanghai while merely offering over-the-counter pink sheets to the U.S.

As a result, foreign investors have become so disinterested in Hon Hai that it gave up running investor relations calls in English and barely fills up the allocated time for its Mandarin events. By contrast, depositary receipts of comparable local powerhouse Taiwan Semiconductor Manufacturing Co. do a brisk trade in New York and its IR conferences are packed with curious overseas shareholders and analysts.

A U.S. listing of Foxconn’s EV unit through a blank check company makes sense because it can get its name in lights, raise funds and show prospective customers that it’s a legitimate player in the automotive market. EVs, servers and secure manufacturing are the right strategies to pursue at its Wisconsin facility, and this new contract gives the firm the flexibility to follow those paths, while adhering to its contractual obligations in the state and meet President Joe Biden’s hopes for a renewed U.S. supply chain.

The bigger challenge is for the company to make a break from its past, where it has a reputation for employing low-cost labor in massive factories in order to churn out gadgets by the ton.

Foxconn must convince people that it’s a reliable partner known for quality and engineering excellence, characteristics crucial to building a credible automotive business. A U.S. share listing alone won’t do that — the company would still need to prove to taxpayers that it’s a trustworthy corporate citizen — but it will be the first step in a long journey of reform.

Source: Bloomberg – Foxconn’s Next US Move Would Be an Electric-Vehicle SPAC