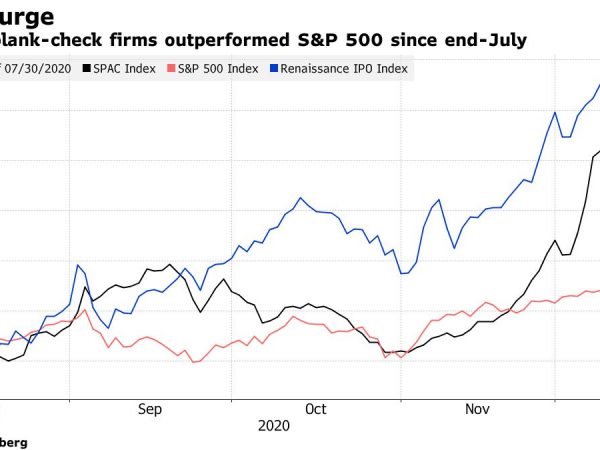 Blank-check companies looking for deals could lead to $300 billion in mergers and acquisitions over the next two years, according to Goldman Sachs Group Inc.

Special-purpose acquisition companies, or SPACs, have raised $70 billion in 2020 — a fivefold increase from last year, according to strategists led by David Kostin. Driving the deal boom is a hunt for yield, a shift in SPAC focus to growth stocks from value and retail investors looking for nontraditional and early-stage businesses, they said.

Some 205 SPACs have raised $61 billion in equity IPO proceeds and are searching for acquisition targets, according to Goldman.

The “year of the SPAC,” as Goldman put it, has seen numerous high-powered investors get in on the act. Acting as a shell company, a blank-check firm’s purpose is to list and then buy another business looking to go public.

JPMorgan’s Highbridge Capital is seeking $1 billion or more to bet on SPACs, according to people with knowledge of the matter. Perella Weinberg Partners is near a deal to go public via a blank-check company, according to a person familiar with the matter. Billionaires such as Richard Branson and Bill Ackman have also been drawn to SPACs.

“We expect a high level of SPAC activity will continue into 2021,” the strategists said, though they cautioned that weak post-acquisition returns could be a headwind to future issuance.