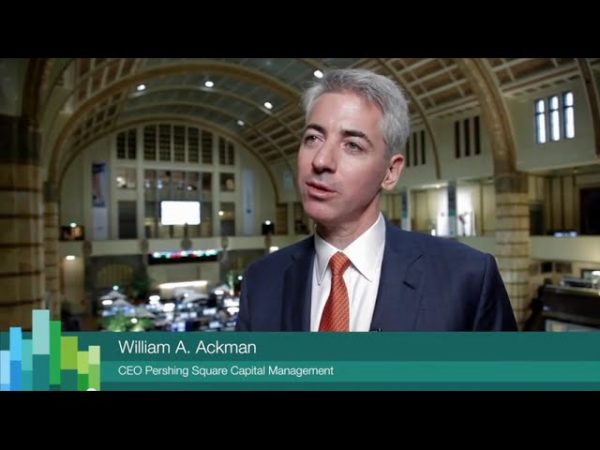 Pershing Square Holdings is a closed-end fund trading in London and Amsterdam.

It trades at a 28.5% discount to net asset value, which is a lot in a relative and absolute sense.

The fund has exposure to sponsorship warrants in the largest SPAC in history that are likely undervalued on its book.

I’ve written about this closed-end-fund, led by the famous activist Bill Ackman, years back and have done well with it at that time. I sold it for something “better” after a while which was probably a bad decision in hindsight. A few months back, I bought it again. So far, it hasn’t moved much. Consequently, I still think this is a great time to buy into Pershing Square Holdings (OTCPK:PSHZF).

Ackman’s Pershing Square is having a banner year, up year-to-date as much as 54.1%. Ackman hedged his long book going into March through buying insurance on corporate bonds. He paid $27 million in premiums which turned into a $2.7 billion payout.

For about a week, it is known that Ackman is back in this trade. Ackman put it on in a smaller size (about 1/3rd of the size in February). This time there isn’t a clear and present danger.

However, I am worried about the underlying economy and the potential for pandemic effects to linger. But Ackman just couldn’t pass up the trade given the market has become so sanguine again, he essentially is getting the same terms as in February of 2020.

Personally, I’m relieved Ackman hedged his book again. He’s running a levered portfolio in a very concentrated manner. On top of that, many of his longs are quality businesses trading at high multiples. It’s not a portfolio I’d love to run into a market drawdown. With the hedge on, I’m more comfortable owning this in some size and could see myself adding if there are no more attractive options.

Even though net assets have grown explosively this year, the unit price has lagged. The discount has been wide ever since Ackman had his contentious Herbalife (NYSE:HLF) short go off the rails and Valeant Pharmaceuticals, now known as Bausch Health Companies (NYSE:BHC), became the scandal of the year. I recently wrote about Bausch Health here, because it is putting its past behind it and quite attractively valued. The discount on the Amsterdam traded shares is now ~28.5%.

Ackman is not complacent about the discount to the net asset value of his fund at all. It is very common for management to complain, but it is actually rare for them to take action. Ackman is putting substantial effort into closing the gap. The fund has voluntarily bought back nearly 20% of its shares outstanding. That’s very unusual, and mostly happens after outside pressure, because it shrinks the assets under management and consequently the fees that can be charged.

Pershing recently initiated a small quarterly dividend of $0.10 per share every quarter. At $0.4 per year, the dividend equates to just 1.3% per year on the share price. However, it is still attractive to buy a dollar at $0.7 and then slowly receive payouts. Ultimately a dividend is a great catalyst to close the gap between the share price and the net asset value.

Finally, to take advantage of and close the discount, insiders increased their ownership from 3.9% to 25%+ in the past few years.

It is the status quo for closed-end funds to trade at a discount. Especially concentrated equity funds that use leverage. Funds that don’t are the exception. This is the time of the year that discounts to net asset value tend to widen the most. But there are still only six closed-end funds in the U.S. trading at a greater discount.

In the U.K., there are over 500 closed-end fund type structures, investment trusts, that trade publicly. Pershing is among the 15% with the widest of discounts. Dan Loeb’s Third Point, also trading in London, trades at only a 15% discount to NAV. Third Point tends to hedge more and is less concentrated but otherwise a decent comparable.

Among the U.S. funds trading at a deeper discount, two are converting to a REIT, one is in leveraged loans, one is a mutual fund that blew up and converted into a closed-end fund to gate its investors (doesn’t win you a popularity contest), one is voluntarily delisting from the NYSE and will trade OTC and an undersized fund investing in MLPs (a very out-of-favor sector).

Pershing Square is a huge fund (meaning expenses related to a listing can be managed well). It is headed by a star manager. There is a lot of insider ownership. The fund can access cheap leverage. Maybe what keeps the discount wide is that the fund could be viewed as a passive foreign investment company, or PFIC, by U.S. investors. I don’t know whether this is the case because I’m not a tax specialist. At the same time, U.K. and Dutch investors may not be intimately familiar with Bill Ackman’s successes and failures. Consequently not being able to assess the merits of his stardom.

One thing is for sure and that’s that Ackman wants to narrow the discount to the net asset value. The buyback program is ongoing (last purchases September) and he’s even trying to get the fund into the FTSE 100 to increase liquidity and attention as described in my previous article on this fund. I’d expect that’s not going to succeed this year, but if Pershing continues to perform well, it could work in 2021. Per Ackman:

Whatever the explanation for today’s large discount, our strong preference is for the shares to trade at or above net asset value over the long term. The only consolation prize to the wide discount is that our share repurchases have provided us with an attractive incremental investment opportunity that has enhanced our returns to shareholders marginally in recent years.

I think Pershing’s net asset value is slightly understated because it owns sponsor warrants in a SPAC called Pershing Square Tontine Holdings (NYSE:PSTH). SPACs, special purpose acquisition companies, are currently all the rage. The basic concept is that investors put money in a trust. A sponsor, usually a group of people with some business fame, finds a private company and buys it with the publicly traded trust. The trust holders can vote for or against the deal. if they vote against, they can redeem their monies. In this case that would be $20 for the units. With most SPACs, the sponsor takes a huge bite out of the economics which has made them notoriously terrible long-term investments. Here’s a more in-depth primer on SPACs.

The Pershing Square Tontine Holdings vehicle, with $5 billion of committed capital, is the largest SPAC ever raised.

Chris DeMuth, who is a SPAC specialist and hosts Sifting The World, talked about the SPAC in detail on the Alpha Trader podcast here. A quote:

That doesn’t mean DeMuth is a fan of all SPACs. In fact, he notes “brutal headwinds” faced by SPACs, and says the odds of a SPAC ultimately succeeding aren’t good. Having said that DeMuth says the selective investor can find big winners in the space. Key criteria: Size – they should be larger than the typical SPAC; they have experienced sponsors; they were brought public by a quality underwriter; they ultimately purchase well-known brands familiar to the investing public.

Ackman is pushing the boundaries of the genre. He started with a structure which at times is so tilted against minority shareholders, I’d be inclined to call it corrupt. But he turned it into something fair and interesting to partake in. From the Pershing Square Holding letter to investors:

With PSTH we eliminated all forms of compensation, advisory fees, and founder shares. We further improved alignment issues by the Pershing Square funds committing to purchase a minimum of $1 billion of common stock and shareholder warrants on the same terms as PSTH’s public shareholders. In addition, the Pershing Square funds purchased so-called Sponsor Warrants for $65 million – their estimated fair market value at the time of the IPO – that will become 10-year warrants on 5.95% of the newly merged company shares, only if we successfully complete a transaction. The Sponsor Warrants have a strike price 20% above PSTH’s IPO price, and are not transferable, salable or exercisable for

Remember that Pershing Square Holdings has 10-year warrants on 5.95% of a company that is brought public through Pershing Square Tontine. These are valued at $65 million. Ackman has committed $1 billion into the Tontine, but has the option to put in another $2 billion. Ackman is aiming to find a company that’s between $15 and $30 billion in size. If he takes a company that large public, the warrants could appreciate 10-fold. The value of the 10-year warrants is highly dependent on the expected volatility of the company’s shares and its total size.

Names that have been associated with Ackman’s SPAC include Airbnb (ABNB), Bumble, Stripe, Robinhood and even Bloomberg. Investors are high-profile names like Baupost Group and Fidelity (the latter is my speculation based on Ackman’s public hints).

I believe the media attention that a star manager like Bill Ackman, backed by a cast of star investors, the largest SPAC in history, combined with a celebrated tech Unicorn will generate is substantial. That media attention will not just help the SPAC to be successful, but should also reflect well on Pershing Square Holdings and function as a catalyst to narrow the discount.

As far as fees go, there’s a management fee and a 16% performance fee. But there is a high watermark to keep the performance fees fair. The fees are high, but that’s not abnormal in the closed-end fund space, and it can’t explain the full ~28% discount.