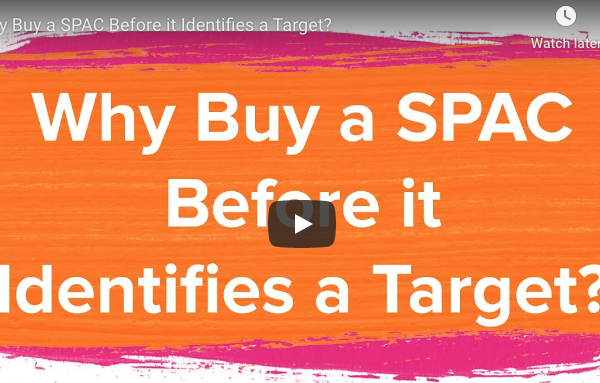 Investing in a special-purpose acquisition company, or SPAC, that hasn’t yet identified which business it plans to take public might seem highly speculative. And in some ways, it is.

However, investing in a predeal SPAC can certainly make sense in some cases. In this Jan. 21 Fool Live video clip, Fool.com contributor Matt Frankel, CFP, who owns several predeal SPACs himself, explains to fellow contributor Brian Withers why this can make sense and what investors should pay attention to.

Matt Frankel: First of all, let’s just talk briefly about what a SPAC is, how it comes to be. Just a little bit of background. I know we’ve covered the basics of SPACs pretty frequently on the show. But generally, a SPAC stands for special-purpose acquisition company. It’s a company specifically formed for the purpose of merging with another business and taking it public. A SPAC generally will, a sponsor will decide to create a SPAC. The SPAC has to have a sponsor. This could be a company, it could be an individual investor. If they are an experienced investor, it could be a hedge fund. But they will issue a registration statement and declare that they are taking a SPAC public, go hire underwriters, things like that. Go through the traditional IPO process just like any other company. The difference is, a SPAC, at the time it goes public, has no business. It’s just going public for the sake of raising some capital.

We spend a lot of time on these shows talking about business analysis. That’s what Brian and I pretty much get we tell you how to evaluate companies. We did a show on Square (NYSE:SQ) and Green Dot (NYSE:GDOT) last week where we walked through how we analyze some of those at a pretty high level.

But the big question on a lot of investors’ minds is, why the heck would you invest in a SPAC that doesn’t have a business yet? You don’t even know what you are buying? That’s a question I’ve gotten a lot. The short answer is you’re betting on management. You’re betting on the SPAC sponsor’s track record and their expertise to find a deal. Because when a SPAC goes well, it can be a great way to get involved in the IPO process, because a lot of individual investors are usually shut out of IPOs, myself included. I don’t know who Brian uses, but I use TD Ameritrade. Brian, what brokerage do you use?

Frankel: OK. Fidelity participates in a few more IPOs than TD Ameritrade does. But the general idea is unless your broker is directly participating in an IPO, you are usually shut out of the deal for an IPO — you have to wait till it trades on the market. The SPAC model is meant to level the playing field. Before we get going, Brian, do you invest in any SPACs on your own?

Withers: I don’t. I’m actually very excited about the show to figure out whether that’s something that I want to get involved with.

I did have one question on your explanation before we jump to the next step is, once the SPAC gets registered, you said that it has no business, right? There’s some kind of market value, right? Because it’s raised money. But there’s a period of time between when it’s raised money and then it’s trading on the market before it declares, like, it’s going to do SoFi. There’s a couple of phases here.

Frankel: That can actually be a long period of time in a lot of cases, in Chamath’s SPACs it really hasn’t taken very long to find deals. But generally, these companies have up to two years to figure out who they are going to take public.

They go public. When a SPAC issues its IPO, it goes public. Usually, the par value is $10 per unit that it sells. We’ll explain where the units and all that mean in a minute. But so it’s sold to investors for $10 a unit, then it starts trading on the public markets. If you look at any predeal SPAC that’s currently listed, it’s not going to be trading for exactly $10.

In most cases, you will see a bit of a premium. If you type in, the one we’re going to go over in detail in a minute is Chamath’s other SPAC, IPOD [Social Capital Hedosophia IV (NYSE:IPOD)]. If you put that in your quote tool, you will see that it’s trading for a big premium to $10 per unit. The reason for that is, if a manager has established a great track record like he has, the expectation is that he is going to create shareholder value by taking the company public. With most SPACs, the difference between $10 and the current trading price is a complete reflection of how the market expects the deal to go.

Source: Google SPAC Feed – Why Buy a SPAC Before It Identifies a Target?